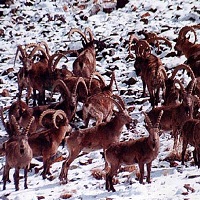 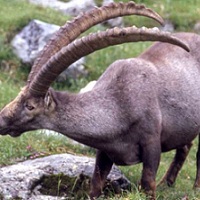 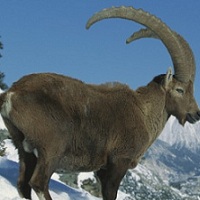 In Kyrgyzstan the ibex hunting is conducted usually from early September to mid-December. The period from mid-September to late November is considered the best time for hunting. During this period the Tien Shan Mountains are home to a large number of ibexes, there are comfortable daytime temperatures: in September 17o C (63o F) and in October-November it is gradually reducing from 12 to 2o C (54o F to 36o F). At this time there is a small amount of snow, it lies only on passes, the animals live relatively low, and you can easily go up by car and get a trophy during 1 day.

Duration of the ibex hunt in Altai is identical to Kyrgyzstan, the same three months, but they are shifted towards the winter. The season lasts from mid-November to mid-January. The hunting is conducted above the forest limit, in the mountainous areas with steep rocky cliffs, narrow cracks at heights of 1,000 to 3,000 meters (3,200 to 10,000 ft) above sea level, with horse or motor rides to location from a base camp accompanied by a guide or a game keeper. Helicopter delivery of hunters to alpine meadows where ibexes feed is in common practice.

In addition to ibexes, you can meet a lot of other animals in the Altai Mountains. We also offer red deer, roe deer, bear, wolf, and wood grouse hunting.

The cost of an ibex hunting license changes from year to year in Kyrgyzstan, the average price is USD 1,000 (refundable in case of not shooting an animal), the hunt in an organized group costs about USD 5,000. Hunting documents and documents for weapon import and export should be legal; otherwise, hunting is considered poaching. You must have a license for weapon and a permission to shoot animals for the ibex hunting in Altai. Weapon type is not limited by rules, except officially banned.

Adult ibex males have a habit to live separately and they graze in alpine meadows in the distance from females and young ibexes, being higher in the mountains compared with a flock, and only occasionally they descend to valleys in the mating season. The ibex hunting methods are stalking, tracking or ambushing in the morning or in the evening when animals go up from resting places for feeding. In search of a big ibex you need to be careful when moving upward by gentle pastures to prevent female goats from giving a signal of danger to males.

Typically, ibexes form a flock of few males and multiple females. Sometimes you can meet flocks which are fully composed of males but usually they are not steady and fall apart rapidly.

The main ibex hunting trophy is its horns, average size of which can reach up to 1 meter (3.2 ft) from the base of the skull but you can meet ibexes with more impressive horns of 120 to 140 cm (47 to 55 in) in length. The ibex horn is a prestigious interior feature and a pride of a hunter. Valuable trophies include meat and fat which become extremely tasty after the autumn fattening, especially when it is grilled. First taste of the meat is traditionally arranged in the evening at the base camp. 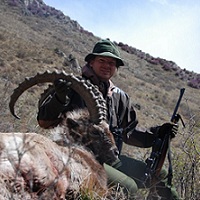 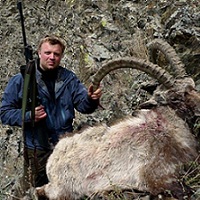 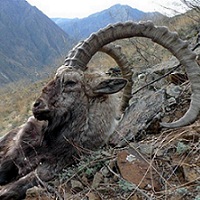